In the News: Fall brings new releases from Piñeiro, Suarez and Brown

September is here. Here’s a look at the latest books and news in Latino lit:

• Already out: In A Crack in the Wall by Claudia Piñeiro, a young woman asks about the whereabouts for a missing person. Piñeiro talked to Publishers Weekly, who called her “Argentina’s top crime writer.”

• Sept. 3 – Latino Americans: The 500-Year Legacy That Shaped a Nation by Ray Suarez is the companion book to the PBS series that will air this month.

• Sept 17: Musician Linda Ronstadt writes about her life in Simple Dreams: A Musical Memoir. She talked to The New York Times about the book and her recent diagnosis of Parkinson’s Disease, which has prevented her from singing.

• Sept. 24: The family of baseball great Roberto Clemente remember him in  Clemente: The True Legacy of an Undying Hero.

• Sergio de la Pava won the PEN/Robert W. Bingham Prize for debut writers for his novel, A Naked Singularity. Publishers Weekly profiled the author who is a public defender, like the character in his book, and self-published the book.

• Oct. 5: Reyna Grande (left) will be the keynote speaker at the Comadres and Compadres Writers Conference in Brooklyn, N.Y. The event will include panelists , such as Raquel Cepeda and Carlos Andrés Gómez, and one-on-one sessions with agents and editors.

• Junot Díaz (left) revealed his writing process to The Daily Beast. He also was profiled in Playboy, an article that received this response from The Atlantic Wire, which compared him to Hugh Hefner but “with less hair and more imagination.” This Is How You Lose Her will come out in paperback Sept. 3, with a deluxe edition featuring illustrations by Jaime Hernandez Oct. 31.

• Juan Gabriel Vásquez (right), author of The Sound of Things Falling, picked his favorite Latino literature picks for The Daily Beast. He also talked to NPR about his book. The Atlantic Wire featured him in an article about contemporary Latin American literature.

• Mario Alberto Zambrano (left) talked about the inspiration of his book Lotería to Kirkus Reviews. Zambrano also appeared on “The Diane Rehm Show” on NPR.

• Fans of Jorge Luis Borges can listen to him discuss his books thanks to some audio recordings he left behind, reports Héctor Tobar of The Los Angeles Times.

• PBS profiled Rueben Martinez, who turned his San Diego barbershop into a bookstore.

• NBC Latino talked to David Tomas Martinez about his transformation from gang member to poet.

On July 4, 1776, the United States of America declared themselves free from Great Britain. Thanks to its diverse population, the United States is one of the world’s great superpowers. And, by 2050, some scholars project it will boast the largest Spanish-speaking population in the world. Here’s a look, by region, at some of America’s great Latino writers.

New Mexico: Native son Rudolfo Anaya, left, considered the father of Chicano literature, has set his novels, including his beloved Bless Me Ultima and Sonny Baca mysteries, in this state. The state also served as the setting for novels by Ana Castillo, Denise Chávez and Alisa Valdes.

Puerto Rico: The Caribbean island joined the United States in 1898. Esmeralda Santiago, right, wrote about her personal history in When I Was Puerto Rican and the island’s history in the novel Conquistadora. Other authors of Puerto Rican heritage include Lyn DiIorio, Sarah McCoy, Piri Thomas, Justin Torres and Willliam Carlos Williams.

Texas: Life on the border has served as fodder for books by Rolando Hinojosa,  left, of the Rio Grande Valley, and Sergio Troncoso of El Paso. Sandra Cisneros, originally from Chicago, set her books Woman Hollering Creek and Have You Seen Marie? in this state. Other Tejanos include Dagoberto Gilb, Manuel Gonzales, Diana López and Gwendolyn Zepeda.

The country’s most prestigious literary award, the Pulitzer Prize, has been given to Cuban-American Oscar Hijuelos and Dominican-American Junot Díaz, right, in the fiction category; Cuban-American Nilo Cruz and Quiara Alegría Hudes, who is of Puerto Rican descent, in drama; and numerous journalists. Eduardo Lalo won the 2013 International Rómulo Gallegos Prize for Fiction, becoming the first American to win one of Latin America’s most prestigious literary awards. The Pura Belpré Award, given by the American Library Association, honors books written for young readers. 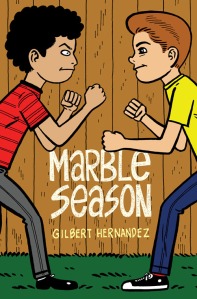 Gilbert Hernandez, the legendary graphic artist who created the Love and Rockets comics with his brothers, has released two books with very different topics – Marble Season (Drawn and Quarterly), an affectionate look at childhood in the 1960s, and Julio’s Day (Fantagraphics Books), a gritty take of one man’s 100 years of life.

Marble Season focuses on Huey, his two brothers and neighborhood pals. The book is a series of vignettes of their day-to-day lives – attempting to play marbles, collecting bubble gum cards and dealing with an obnoxious new kid in the neighborhood. Huey’s biggest problem in life? He’s not allowed to read comic books after his brother got a bad report card and his parents put them away.

Marble Season is retro – there’s a helpful guide in the back that explains the pop culture references. It’s a charming book that children and adults will read with amusement.

By contrast, Julio’s Day is a far more ambitious and serious. The book opens with the birth of its main character, Julio Reyes, and follows him and several generations of his family through the century as they experience love, go to war and suffer some terrible illnesses. The books ends with Julio’s final breath. (Note: the book has some graphic images of illness, death and sex. You can read an excerpt of the book on this NPR webpage.)

Hernandez’s ability to capture life in just a few short frames would be the kind of books that would appeal to reluctant readers, especially teenage boys. I was especially intrigued with his drawings. With just a few strokes, he’s able to create a menacing sky or depict the ravages of illness.

Both books are entertaining, but your enjoyment may depend on your mood. Marble Season will make you smile. Julio’s Day will make you think.

Hernandez is known for writing and drawing the Love and Rockets graphic comics with his brothers Jaime and Mario. He has been nominated twice for Best Writer/Artist for the Will Eisner Comic Industry Awards. He grew up in Oxnard, Calif.

Source: I received a review copy of Marble Season. I purchased Julio’s Day.