Under the Feet of Jesus by Helena María Viramontes has been hailed as one of the great books of Latino literature with its lyrical prose and depiction of the struggles of farmworkers. But to me, it was challenging to read.

The 1995 novel follows a family of migrants as they move from one farm to another, looking for work. Petra is the mother, who is accompanied by her much older companion, Perfecto, and her children, including a pair of twins and her daughter, Estrella.

At times, Viramontes’ descriptions are absolutely breathtaking. Take this scene with Estrella in the fields.

“Carrying the full basket to the paper was not like the picture on the red raisin boxes Estrella saw in the markets, not like the woman wearing a fluffy bonnet, holding out the grapes with her smiling, ruby lips, the sun a flat orange behind her. The sun was white and it made Estrella’s eyes sting like an onion, and the baskets of grapes resisted her muscles, pulling their magnetic weight back to the earth. The woman with the red bonnet did not know this.”

But the book moves so slowly. Instead of a well-paced plot, Viramontes spends most of the times describing little things and creating metaphors. Take this scene at a clinic:

“There was a row of glass jars filled with flat tongue depressors that reminded them of fat ice cream sticks, gauze pads and cottons swabs on skinny wooden sticks that looked like the legs of ballet dances in tan nylons and white shoes; thermometers in a glass tube and a big jar of cotton balls.”

That’s some nice imagery, but it doesn’t tell me anything. Fortunately, that passage in the clinic turns into the most riveting scene in the book. The family only has $9.07 to its name and a car with no gas, and they must seek medical help for Alejo – forcing Estrella makes a drastic move to get help. I finally was swept up in the novel.

For readers who love descriptions and metaphors, this is a great book for them. But readers like me who prefer a strong plot will find this book frustrating. 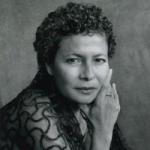 A California native, Viramontes also wrote The Moths and Other Stories and Their Dogs Came With Them, and co-edited Chicana (W)rites: On Word and Film and Chicana Creativity and Criticism with Maria Herrera Sobek.