At the theater: Lorca’s timeless works 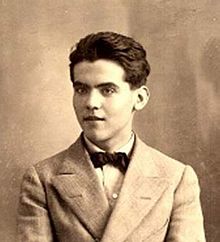 Federico García Lorca’s plays were written in the 1920s and 1930s, but they are still relevant today.

Teatro Dallas will present a “Homage to Federico García Lorca,” which includes a Cientos de Pájaros te Impiden Andar/A Hundred Birds Prevent you from Walking, an adaption of the Spaniard’s Blood Wedding, Feb. 8-9 and a series of stage readings of Lorca’s poems Feb. 22, 23, 24 and March 1, 2 and 3.

Cora Cardona, artistic/managing director for Teatro Dallas, says the tribute to Lorca (above) seemed natural after she discovered Vidal was visiting Texas.

“He’s timeless in that he still has have issues that are relevant today,” she says. “Lorca is definitely one of these writers that speaks to us.”

In the production, a woman has an affair with a man but her family disapproves of him. She separates from him, and her family arranges for her to marry another man. Then she sees her old lover again – and the story ends in tragedy.

The play, which takes place in the 1920s and 1930s, brings up several elements Lorca is known for – addressing societal issues that remain relevant today, such as women’s independence and domestic violence, and his use of nature interacting with characters, like the moon and animals talking to the couple.

The company’s homage to Lorca will continue with a stage reading of his “Romancero Gitano” – which reflects Lorca’s Gypsy background – with local artists.

Cardona noted that Lorca lived in a repressive, violent time period in his native country – and his plays seem to be about family when they’re symbolic of his homeland.

“He foresaw the future in many ways, especially when it came to capitalism and social issues,” she says. “It’s amazing he was already thinking about what was happening in the future.”

Note: This article also appeared in a slightly different form on the Theater Jones website.