Cuba declared its independence from Spain on May 20, 1902. The Caribbean country has had a turbulent history – making it a rich topic for its writers.

• Nicolás Guillén (1902-1989), once the national poet of Cuba, is known for his poems about social justice that he wrote in the 1920s and 1930s. The country’s winners of the  Miguel de Cervantes Prize, given to Spanish-language writers, are playwright Alejo Carpentier, poet Dulce María Loynaz and novelist Guillermo Cabrera Infante.

• Oscar Hijuelos, who was born in New York City to Cuban parents, became the first Latino to win the Pulitzer Prize for fiction with his 1989 book The Mambo Kings Play Songs of Love, about two Cuban brothers who pursue their musical dreams in New York City. Hijuelos also wrote the novels Our House in the Last World and Mr. Ives’ Christmas and the memoir Thoughts Without Cigarettes.

• Two writers who were born in Havana and immigrated to the United States have used Cuba as a setting for their novels. Cristina García, left, showed one family’s life in Dreaming in Cuban and describes the effects of dictator Fidel Castro’s regime in the just released  King of Cuba. The Castro government plays a key role in the characters’ lives of Elizabeth Huergo’s The Death of Fidel Pérez.

• California-raised children’s writer Margarita Engle draws on Cuba’s history for her free verse books, including The Lightning Dreamer, Cuba’s Greatest Abolitionist, about Gertrudis Gómez de Avellaneda; The Surrender Tree, about a nurse who helps those while war rages in Cuba in 1896; and The Poet Slave of Cuba: A Biography of Juan Francisco Manzano.

• Carlos Eire was airlifted from Havana during Operation Pedro Pan, a CIA operation in which thousands of Cuban children were taken to the United States in the early 1960s – an experience he wrote about in Waiting for Snow in Havana: Confessions of a Cuban Boy. His follow-up book was Learning to Die in Miami: Confessions of a Refugee Boy.

Other writers with Cuban roots include Meg Medina, Caridad Piñeiro and Alisa Valdes.

Halloween is a holiday for children, but adults can get in the act, too. (Why turn down the candy?) There’s no better way to get into the mood than with a creepy or suspenseful book. As part of book blogger Jenn Lawrence’s meme, Murder, Monsters & Mayhem, here’s a list of Latino-themed thrillers. And check out our list of Halloween books for children posted earlier this week.

Let’s start with the monsters – specifically, vampires. The Strain is a trilogy of novels by Mexican film director Guillermo del Toro, written with Chuck Hogan, about a virus that vampires inflict on the world. (If you want a creepy movie to watch on Halloween, his 2006 film Pan’s Labyrinth is an excellent choice.)

For a humorous touch, Marta Acosta’s Casa Dracula series, including Happy Hour at Casa Dracula, features a romance between the main character, Milagro de Los Santos, and a vampire. Caridad Piñeiro’s new book, Kissed by a Vampire, also features a paranormal romance – all part of her The Calling/Reborn series featuring the undead beasts.

Now let’s get to murder and mayhem, with several book series featuring Latino crime solvers. The Henry Rios series by Michael Nava, which has a gay lawyer in San Francisco as its lead character, began with The Little Death and ended with Rag and Bone. Rudolfo Anaya’s Sonny Baca series, which includes Zia Summer and Jemez Spring, features a detective solving crimes in New Mexico. The Rio Grande Valley is home to several thrillers, including Partners in Crime, by Rolando Hinojosa.

For books with a strong female protagonist, Lucha Corpi’s mysteries – including Eulogy for a Brown Angel, Cactus Blood and Black Widow’s Wardrobe – features a clairvoyant detective solving crimes in Los Angeles. Or try these recent thrillers: Lyn DiIorio’s Outside the Bones, about a bruja who gets caught up in an old mystery; Joy Castro’s Hell or High Water , which has a newspaper reporter investigating sexual predators in New Orleans; and Linda Rodriguez’s  Every Last Secret, about a college police chief who solves a murder on campus.

Meet novelist Caridad Piñeiro, author of “Kissed by a Vampire” 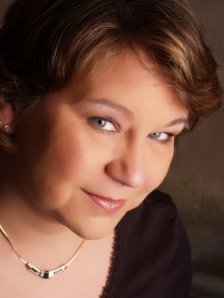 Caridad Piñeiro has given Latino literature a supernatural edge.

Her latest novel is Kissed by a Vampire, featuring a paranormal romance. She’s written nearly three dozen books, including the Chicas romance series and the The Calling/Reborn series. She’s received numerous awards from romance writers associations.

Piñeiro was born in Havana, Cuba, and worked as an attorney. This post is part of a blog tour for Kissed by a Vampire. 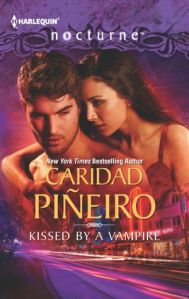 Q: Tell us about your latest book, Kissed by a Vampire.

Kissed by a Vampire is the story of a 2000-year-old vampire, Stacia, who has grown tired of her eternal life and has also grown lonely. She doesn’t believe it’s possible for her to find love or have any kind of lasting relationship, but then she meets DEA Agent Alex Garcia. Or should I say is reunited with him. She had saved his life many years earlier when Alex was shot during a raid that went wrong. Stacia had taken pity on Alex when she saw the love in his eyes for another agent who had been shot during the same raid. When Stacia runs into Alex again, she is unprepared for her attraction to him and for the emotions he rouses. Kissed by a Vampire is sexy and emotional. It’s also action-packed as Stacia decides to help Alex find a missing young woman and shut down a white slavery ring.

Q: Most of your novels deal with paranormal romance. What drew you to this genre? Why has it become so popular?

I was in a dark mood and wanted to vent that in my writing. I also thought that stories with paranormal elements would let me play with different ideas that I could not include in more traditional romances. I think the ability to have such different stories, especially the edgier kinds of stories possible with paranormals, is what has made the genre so popular.

Q: How has your Cuban/Latino heritage inspired your work? Who are your favorite Latino authors?

I try to include aspects of my culture and/or other Latino culture in as many works as I can.  For example, one of the main characters in The Calling/Reborn series is Cuban-American FBI Agent Diana Reyes. In her stories, I’ve brought in her family’s values and foods. In Kissed by a Vampire, the story is set in South Beach and I’ve tried to work in the flavor that Cuban-Americans have given to that area. As for my favorite Latino authors, there quite a few. Julia Amante, Sylvia Mendoza, Berta Platas, Tracey Montoya, Reyna Grande, Julia Alvarez and Aimee Thurlo just to name a few.

In the news: New releases from González and Díaz, book festivals and more

Already released: Rigoberto González’s Mariposa Gown – a sequel to The Mariposa Club –depicts the friendship between three teenage boys who want to make a splash at their high school prom with the titular outfit. 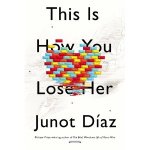 • Sept. 11: Pulitzer Prize winner Junot Díaz will release a collection of short stories, This is How You Lose Her. Here’s a cool Pinterest board by blogger Poornima Apte that shows the town and other details from the book. (She did the same for Roberto Ampuero’s The Neruda Case and other books.) Díaz has been all over the media: dressing up in Edith Wharton-era clothes for a Vogue fashion spread; discussing his love life in New York magazine; sharing his reading habits with The New York Times; and compiling a playlist to NPR’s alt. Latino website.

• Sept. 25: In the novel The Secret Book of Frida Kahlo, Mexican writer F.G. Haghenbeck writes about the life of the iconic Mexican artist.

Here’s a look at some upcoming book festivals:

• Several Latino-oriented literary magazines are out with new issues. Acentos Review, edited by Bonafide Rojas, focuses on music on its August 2012 edition. The bilingual BorderSenses published its 18th volume. Lorna Dee Cervantes, Rigoberto Gonzales and Andrea J. Serrano are featured in the latest issue of the Mas Tequila Review.

• The fall issue of Zyzzyva magazine, which is devoted to West Coast writers, features works by Dagoberto Gilb and Luis Alberto Urrea.

• Sept. 21: Librotraficante, which was founded earlier this year to protest the state of Arizona’s ban on ethnic studies, will host a 50 States of Freedom of Speech event in honor of Hispanic Heritage Month, which begins Sept. 15.

• The El Paso Times has marked the 40th anniversary of the Rudolfo Anaya novel Bless Me Ultima with essays from Rigoberto González, Denise Chávez and other writers.

• Argentine writers will now receive a pension, according to The New York Times.

• Reyna Grande, author of The Distance Between Us, talked to the Zyzzyva website.

• Junot Díaz was among the writers at the Edinburgh World Writer’s Conference who condemned Arizona’s ban on ethnic studies.

In the News: New releases, writer’s workshop and García Márquez

Hello August! Here are great selections to beat the heat:

• Already released: Gustavo Arellano and Luis Alberto Urrea are among the writers who contributed to Ban This! The BSP Anthology of Xican@ Literature, edited by S.J. Rivera. The book was published in response to the state of Arizona’s ban on ethnic studies earlier this year.

• Now in paperback: Esmeralda Santiago’s Conquistadora, which was selected as Ladies’ Home Journal’s August Book of the Month (here’s a discussion guide and letter from Santiago); Paulo Coelho’s Aleph; Maria Duenas’ The Time in Between and Javier Sierra’s The Lost Angel.

• Aug. 28: Reyna Grande writes about immigrating from Mexico to California in her memoir, The Distance Between Us.

• Sad News: It’s been confirmed that Nobel Prize winner Gabriel Garcia Márquez,  right, can no longer write due to dementia, according to The New York Times. The Daily Beast/Newsweek ran an interesting blog post about his writing process.

• Bless Me Ultima author Rudolfo Anaya was honored by the city of El Paso as the movie version of the book is expected to premiere in September, reports the El Paso Times.

• Poets and Writers magazine profiled the Librotraficante movement. Its founder, Tony Díaz is planning a “50 for Freedom of Speech” teach-in in all 50 states Sept. 21.

• Joy Castro talked about her novel, Hell or High Water, to Book Page.

• Mexican-American poet Manuel Paul Lopez of El Centro, Calif., was featured in a KCET animated short about his chapbook, “1984,” which is his interpretation of the classic George Orwell novel.

• Junot Díaz discussed his short story, “The Cheater’s Guide to Love,” to The New Yorker. The story is included in his book, This is How You Lose Her, out on Sept. 11.

• Diana Gabaldon will see her Outlander books made into a TV series, according to the Word & Film website.

• A new literary prize for works written in Spanish will be named after the late Carlos Fuentes, reports Publishing Perspectives.

In the news: Honors for Herrera, Tafolla, Brown, Sanchez

• Monica Brown won a Christopher Award, which is given to artists “whose work affirms the highest values of the human spirit,” for her book, Waiting for the Biblioburro.

• Alex Sanchez’s (right) young adult novel Boyfriends With Girlfriends and Jeanne Córdova’s When We Were Outlaws: A Memoir of Love & Revolution received nominations from the Lambda Literary Awards, which honors gay-lesbian-bisexual-trangendered works. Other nominated books include Gay Latino Studies: A Critical Reader, edited by Michael Hames-García and Ernesto Javier Martínez, and ¡Venceremos?: The Erotics of Black Self-making in Cuba, by Jafari S. Allen. Winners will be announced in June.

• Caridad Piñeiro’s The Lost was nominated for a RITA Award from the Romance Writers of America in the Paranormal Category. Winners will be announced in July.

• Charles Rice-Gonzalez was profiled in The New York Daily News.