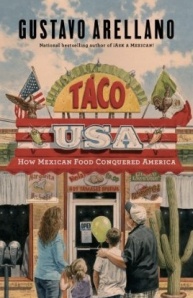 Arellano covers the history of Mexican food, from its origins with the Aztecs to its present-day incarnations at Chipotle. In meticulous detail, Arellano writes about the selling of tamales on street corners, the emergence of the tortilla and salsa, and the creation of the margarita machine, among other topics.

Interestingly, some of the most prominent Mexican food – such as Taco Bell, Fritos and Paso picante sauce –was built up by Anglos. But all of the stories reveal great entrepreneurial spirit and ingenious inventions. (Sadly, his book went to press before the introduction of Doritos Locos Tacos.)

Arellano’s enthusiastic, descriptive and humorous writing makes this book so much fun to read. Check out this passage about a meal at Manuel’s El Tepeyac Café:

“There is a burrito sold in the Los Angeles neighborhood of Boyle Heights that’s beyond cosmic, that’s as close to touching God while eating Mexican food as finding Jesus on a tortilla. … Manuel’s Special: five pounds, beans and rice and guacamole and sour cream and your choice of meat – juicy nubs of grilled chicken, carne asada burned into succulent charcoal, or best with machaca, shredded beef that sticks between molars for hours afterward, heavily spiced and just grand, wrapped in a flour tortilla that, if laid flat, can serve as swaddling cloth for a puppy.”

A few quibbles: As a Texan, the book seemed a bit California-centric to me. How does the Rio Grande Valley get only one paragraph in a book about Mexican food? Although it doesn’t have the mass appeal of burritos and margaritas, I would have liked to read more about the history of pan dulce and menudo. I also would have liked to see some sociological and cultural analysis of the Americans’ seemingly contradictory anti-immigrant fervor and love for Mexican food.

The book left me hungry for that information, but it also made me hungry, literally. After reading the chapter on tortillas, I had to go to Chipotle (the closest available Mexican food place) for dinner.

Gustavo Arellano, the editor of OC Weekly, is best known for his Ask a Mexican column. He also teaches at California State University, Fullerton.

Source: I purchased this book through Amazon.com.