Héctor Tobar’s novel, The Barbarian Nurseries (Farrar, Straus and Giroux) covers everything from the immigration debate to suburban angst – and he does it brilliantly.

His novel centers on Scott and Maureen Torres-Thompson, an Orange County couple who have it all – a beautiful home with an ocean view, two bright sons who go to private school and loads of debt. They’ve laid off their gardener and nanny, but have retained their housekeeper, Araceli, an undocumented immigrant from Mexico City who works for them for $250 a week and housing.

After the couple has an intense argument, Araceli is left alone with the two boys, Brandon, 11, and Keenan, 8. Through a series of circumstances, she finds herself lost in the labyrinth that is Los Angeles – and facing serious consequences that she barely understands.

Scott and Maureen also question their lifestyles. As Maureen, a stay-at-home mom, says of Araceli, “I have allowed this person to live in my home for four years without once having a substantial conversation about where she is from, about her brothers and sisters, or about how she got here.”

The book starts off slowly, but once it gets going, you don’t want to stop reading. Tobar, a Pulitzer-prize winning reporter for The Los Angeles Times, keeps the plot tight while zinging ambitious lawyers and politicians, angry white conservatives, do-gooder liberals, and the sensational media along the way. He writes the female characters well, making Araceli a complex character with ambitions beyond cleaning homes. Tobar even nails a romantic scene. Can we give this man another Pulitzer Prize? 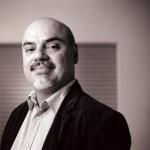 • Tobar, the son of Guatemalan immigrants, writes a weekly column for The Los Angeles Times.

• Tobar is scheduled to make about a dozen appearances across the country in support of his book.

• In this NPR profile, Tobar discusses the inspiration for the book.