Book Review: Rolando Hinojosa’s “Partners in Crime” and “A Voice of My Own”

Rolando Hinojosa may perhaps be one of the greatest storytellers from the Rio Grande Valley. Hinojosa, who grew up in Mercedes, Texas, a small town near the Mexican border, has written about the land’s quirks and contradictions in more than a dozen books. The Valley plays a big role in two books just released by Arte Publico Press, the detective story, Partners in Crime, and the collection A Voice of My Own: Essays and Stories.

Partners is part of the Klail City Death Trip series featuring Lieutenant Detective Rafe Buenrostro and taking place in Jones City, which appears to be modeled on Brownsville. In the novel, three men walk into a bar and start shooting up the place with their automatic rifles. The detectives must seek out the one clue about the murderers left by witnesses – a cream-colored Oldsmobile.

Partners was originally published in 1985 and the story takes place in 1972. It’s amusing to see how detectives worked without the Internet and cell phones, but the plot isn’t particularly captivating. The book’s strength comes from Hinojosa’s brisk writing. Like the detectives in the novel, he gives no bull but plenty of wit. 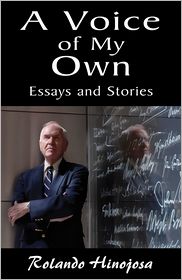 While Partners is an easy read, Hinojosa’s collections of short stories and essays are a little more frustrating. The 15 essays and four short stories – six of which are in Spanish – covers more than 25 years of writing about his life in the Valley and his thoughts on literature. Hinojosa, who is a creative writing professor at the University of Texas at Austin, can be wordy and unfocused in his pieces about literature. He uses the word “digression” often. He’s more interesting when he talks about his personal life, such as growing up in the Valley, describing his school days at the UT in the 1950s or showing how he wrote a poem.

The book ends with a few short stories. “Miami, Nice Climate” is a fast-paced  tale in the Rafe Buenrostro mode. “Es El Agua” is a beautiful and heartbreaking story about a migrant worker who recalls the travels in his life – from France, where he fought in the World War II and his brothers lost their lives, to the Midwest farms where he worked. But his home remains the Valley, the narrator says.

“It’s the water, the Rio Grande water,” the narrator says. “It claims you, you understand? It’s yours and you belong to it, too. No matter where we work, we always come back. To the border, to the Valley.”

• Hinojosa, who sometimes uses his mother’s name Smith, talked about his book of essays to the Austin Chronicle before his appearance at the Texas Book Festival earlier this year.

Source: I received advance copies of the books from Arte Público Press.

One response to “Book Review: Rolando Hinojosa’s “Partners in Crime” and “A Voice of My Own””