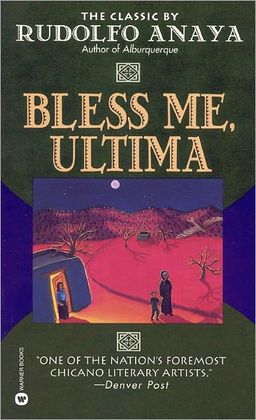 It’s easy to see why Rudolfo Anaya’s Bless Me, Ultima has become one of Latino literature’s greatest classics and a well-read book in the classroom. The story of one boy’s struggle to find faith touches readers on a personal and cultural level.

Ultima was first published in 1972 by a small press, then grew in popularity through the decades – and has been the subject of banning at schools due to profanity. The book has been made into a movie that will be released this year.

The book is told through the eyes of 6-year-old Antonio Marez, who lives in rural New Mexico with his family in the 1940s. His mother wants him to become a priest, hoping for a more stable life than his brothers and some of the other villagers. The family invites Ultima, an elderly curandera, to live with them and she makes an instant connection with Antonio.

Antonio begins having visions as his town experiences some tough situations – including a shooting he witnesses. Some townspeople are angry at Ultima, accusing her of being a bruja who places curses on others.

But Ultima also heals people. As he undergoes his First Communion, Antonio begins to question his Catholic faith.

The book is a fast read, with a well-paced plot and vivid descriptions about the land. Anaya also balances the dramatic passages with funny scenes at a Christmas pageant and Holy Communion.

Many Latinos – such as novelist Julia Amante, La Casa Azul bookseller Aurora Anaya-Cerda and writer Richard Yañez and others in a series of essays in the El Paso Times – cite this as one of their favorite books because they saw themselves depicted in the novel.

Bless Me, Ultima features some of the most prominent elements of Latino literature and the universal themes such as the importance of family and the toughness of growing up. Little wonder why it’s a classic.

Anaya wrote Bless Me Ultima while working as a teacher in New Mexico in the 1960s. He went on to write many other books, including Alburquerque and the Sonny Baca mystery series, and he is considered the father of the Chicano literary movement.

Note: This is the first in my series of reviews of great Latino novels. Next up: The Aleph by Jorge Luis Borges.