Halloween is approaching, and that means many storytellers will be weaving the famous Hispanic scary story of La Llorona, the weeping woman who drowned her children and looks for them along rivers and canals. The folktale, especially popular in Texas, has many versions. Storyteller Joe Hayes turned that story into a book, La Llorona/The Weeping Woman, in 1987, and it has gone on to sell more than 300,000 books for Cinco Puntos Press. Hayes grew up in Arizona, where he learned Spanish from his Mexican-American friends. Hayes has written more than three dozen children’s books that are written in English and Spanish.

Q: Why are people so intrigued by the tale of La Llorona?

There are really three aspects to the character of La Llorona. First, she’s a threatening character you have to look out for, especially if you’re a kid. This by far the best-known aspect. Many people know of her in this role, without knowing the tale behind it, or knowing only the detail that she drowned her children. And then there’s the legendary tale of her. It’s a legend because it’s widely accepted as factual. Finally, there are the many stories of personal experiences involving La Llorona. In my version in The Day It Snowed Tortillas (a collection of his short stories), I include all three aspects of her. And I think these three facets of La Llorona combine to make her so intriguing. Children are fascinated by a vague threat, and even more so if there’s a safety valve, a way to avoid the threat: Stay inside at night. The theme of a mother who kills her own children is widespread in folklore. It’s such a violation of the natural order, that people can’t quite get it out of their minds. And a character who is perpetually mourning and seeking forgiveness also has a strong hold on the imagination. Finally, so many people swear they’ve seen or heard La Llorona, that children can never quite declare that they don’t believe the story. There’s always that sense of “I don’t really think it’s true, but…but…” 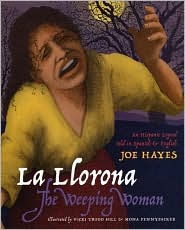 Q: The story has many different versions. How did you adjust it to your book version?

I just started telling the story several decades ago, combining things I had heard as a kid with my own imagination. Over the years, the listeners helped me refine the story by the way they reacted to it. The printed version is somewhere between the way I started out telling and how I now tell it. I always tried not to glorify the violence that’s inherent in the tale, but refused to abandoned the essential fact that she drowned her children. I can’t stand some of the contemporary versions that turn La Llorona into a helpful character, or say that she didn’t actually drown the children. They rob the story of it’s mythic quality. The story, at least my story, of La Llorona is highly moralistic. It’s a teaching story.

Q: As an Anglo man, what has appealed to you about communicating through different cultures?

I have always believed that stories belong to those who honor and care for them. Years ago when I first started tellling stories, I knew that the story of La Llorona needed to be perpetuated. No other storytellers were telling it. So, without reasoning why, I just started telling the story. That’s changed now, of course. Many people tell it. I now realize that I’ve been able to make a greater contribution, both to Hispanic and non-Hispanic children, by not being Hispanic than I could ever have made were I Hispanic. It’s opened minds to the fact that words are for everyone, ideas are for everyone. The human family is one big round circle, not a lot of separate straight lines.