Book review: Maria Dueñas’s “The Time in Between” 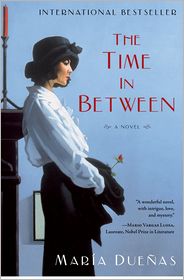 In Maria Dueñas’s novel, The Time in Between, Sira Quiroga goes from humble dressmaker to World War II spy in just a few years. The transformation is a mostly fascinating and sometimes frustrating tale.

The book begins in 1935 in Madrid, where Sira is, as one character describes her, a “young dressmaker filled with tenderness and innocence,” and engaged to a civil servant. But, she says, “a typewriter shattered my destiny.” While visiting an office supply store, she meets and eventually falls in love with another man. She moves with him to Morocco with the promise that they will start their own business. But, through a series of rather unpleasant surprises, Sira has to return to her sewing skills as a means of survival. She makes friends with several people on the social scene, and she returns to Madrid to design clothes for the wives of German Nazis – and tries to find out about their husbands’ plans as World War II begins to brew.

Sira’s means of spying is one of several clever twists in the book – and Sira goes through plenty of life-changing events that will elicit a few gasps. Like any spy novel, the book has its share of intrigue and coincidences. But I wish the 600-page book, which was translated by Daniel Hahn, had more dialogue and shorter paragraphs. Although Dueñas writes beautifully, the book dragged at times and needed a faster pace. I also wished two of the more colorful characters – her feisty landlord, Candelaria, and a fun next-door-neighbor, Félix – had stuck around longer.

Still, Sira makes a strong feminist character and, although the ending doesn’t suggest a sequel, I’d read a series of her spy adventures. And if we can’t get that, can we get a movie starring Penélope Cruz and Javier Bardem?

• Dueñas, a professor in Spain, based some of the characters on real life people involved in World War II. She talked about the book to Publishers Weekly when it came out earlier this fall.

Source: I checked the book out from my local library.