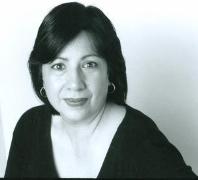 The California native is the author of the recently released The She-Hulk Diaries, about the cousin of the Incredible Hulk. Her young adult gothic novel Dark Companion, a homage to Charlotte Bronte’s Jane Eyre with a multiracial narrator, is now out in paperback. She also is the author of the Casa Dracula series of books featuring a female vampire.

Q: Tell me about your latest book, The She-Hulk Diaries. How did you become involved in the project?

Hi, Jessica, thanks for having me at The Hispanic Reader! My agent heard about the project for a contemporary romantic comedy featuring Jennifer Walters, a top attorney, and her superhuman alter-ego, She-Hulk, and pitched me to Hyperion, which partnered with Marvel. She knew that I love writing first-person romantic comedy with supernatural elements. I was thrilled to be able to write this character from a woman’s perspective.

Q: Your books, including the Casa Dracula books and the novel Dark Companion, feature plots in which the characters deal with otherworldly characters or themes. What appealed to you about that type of genre?

I wrote Happy Hour at Casa Dracula on impulse, because I’d been watching some science fiction movie and I was ranting, “Why don’t we ever see Latinos in outer space? Why don’t we see Latinos in speculative fiction?” I spoofed the genre stereotypes and used vampires as a metaphor for “other” in society, and my protagonist, the bright irrepressible Milagro De Los Santos, is “other.” She describes herself as a square peg in a round world. When she’s infected with “vampirism,” she must hide out with a pack of high-achieving vampires at their country estate. They think she’s a tacky gold-digger; she thinks they’re terrible snobs. I used the humorous situation to address issues of class, race/ethnicity and gender.

My editor asked me for a series. I added in the supernatural element to Dark Companion, a homage to Jane Eyre and classic gothics, because the supernatural is a gothic trope. I’ve always enjoyed placing characters in a situation where the ordinary rules don’t apply.

Q. What inspired you to become a writer? What Latino/a authors influenced your work?

I just wrote as soon as I learned how. I wrote compulsively and to entertain myself. As a native English speaker, I was influenced by British and American writers, including humorists like Mark Twain, Jane Austen, Evelyn Waugh, Kurt Vonnegut. I love the absurdist comedy in Mario Vargas Llosa’s brilliant Aunt Julia and the Scriptwriter, a book I’ve bought at least a dozen times because I’m always giving it away to friends. While I’ve only published silly poetry in my novels, I’ve written more serious poetry, inspired by Pablo Neruda’s beautiful poetry.