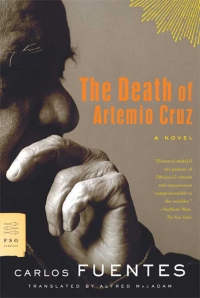 The Death of Artemio Cruz (Farrar, Straus and Giroux) by Carlos Fuentes is the elegantly written novel about an enigmatic man.

The book was released in 1962 in the midst of the Latin American boom in literature that brought novels from Gabriel García Marquez, Mario Vargas Llosa and Julio Cortázar. The book is considered the greatest work from the Mexican writer, who passed away last year.

The book begins with 71-year-old Cruz, a businessman and former Congressman, lying in a coma in a hospital. His wife, Catalina, and daughter, Theresa, would like to see him die – for financial and emotional reasons. Cruz drifts in and out of the coma, thinking about the experiences in his life – taking advantage of peasants to add to his fortune; having affairs with numerous women, including his wife’s best friend; fighting for the government, and betraying a friend, in the Mexican Revolution. He recalls these and numerous other incidents without any sense of guilt or remorse.

I was intimidated by Cruz, but the book was fairly easy to read thanks to Alfred Mac Adam’s clear translation. The book requires patience at times. Fuentes writes in long paragraphs that almost seem like they will never end. The situations may take some time to figure out because they often begin in the middle of a scene or conversation.

But in those long paragraphs, Fuentes makes some great observations about the choices people make in life.

“It’s much easier to say: this is good and that is evil. Evil. You could never say, ‘That is evil.’ Perhaps because we are more forsaken, we do not want to lose that intermediate, ambiguous zone between light and shadow, that zone where we can find forgiveness. Where you may be able to find it. Isn’t everyone, in a single moment of his life, capable of embodying – as you do – good and evil at two mysterious, different-colored threads that unwind from the same spool, so that the white thread ascends and the black descends and, despite everything, the two come together again in his very fingers? You won’t want to think about all that. You will detest me for reminding you of it.”

The rights for the movie version were sold last year, and I’d be interested to see how this book translates to film. Artermio Cruz, the character, is not easy to like. But Artemio Cruz, the book, is an intriguing experience.

One of Mexico’s best known novelists, Fuentes also wrote The Old Gringo, Aura and other novels. He won the Cervantes Prize, given to Spanish-speaking writers, in 1987. He passed away in May 2012. Here’s his obituary from The New York Times.

Note: This review is part of my series of classic Latino novels. Up next: One Hundred Years of Solitude by Gabriel García Márquez.