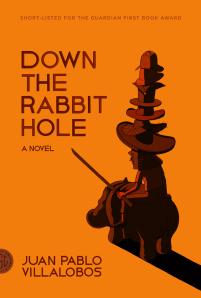 Down the Rabbit Hole (Farrar, Straus and Giroux) by Juan Pablo Villalobos seems like a crazy book, almost a fantasy – but it’s a serious book about one boy’s harsh reality.

Tochtli, the narrator, is a seven-year-old boy who lives in a palace in Mexico filled with ammunition. When he says he wants a pygmy hippopotamus, his family takes him on a safari in Liberia to get him one.

Sounds surreal, right? But Tochtli is the son of a drug gang leader.

The concept works because of Villalobos’ strong voice. Thanks to Villalobos and the book’s translator, Rosalind Harvey, Tochtli sounds both innocent and precocious. Take this passage in which he describes his preference for guillotines compared to the violent images seen on TV:

“The French put the heads in a basket after cutting them off. I saw it in a film. They put a basket just under the king’s head in a guillotine. Then the French let the blade fall and the king’s head is cut off and lands in the basket. That’s why I like the French so much. They’re so refined.”

He’s funny, too, as in this passage on the subject of food:

“I don’t like pozole much, mainly because it’s got cooked lettuce in it, which is ridiculous. Lettuce is for salads and sandwiches. Also you make pozole with pigs’ heads: once I peeped into the pot and there were teeth and ears floating around in the broth. Sordid. The things I like are enchiladas, quesadillas, and tacos al pastor. I like tacos al pastor without the pineapple, because pineapple on a taco is ridiculous, too. I hardly put any chili on my enchiladas, because otherwise my belly hurts a lot.”

One thing that bothered me: the frequent use of the F word (the one used to deride homosexuals). It was unnecessary and jarring to read.

Still, the book is an fast, fascinating read. At just 70 pages, Down the Rabbit Hole creates a unique  experience that makes you laugh and cringe.

Source: I received a review copy from the publisher.